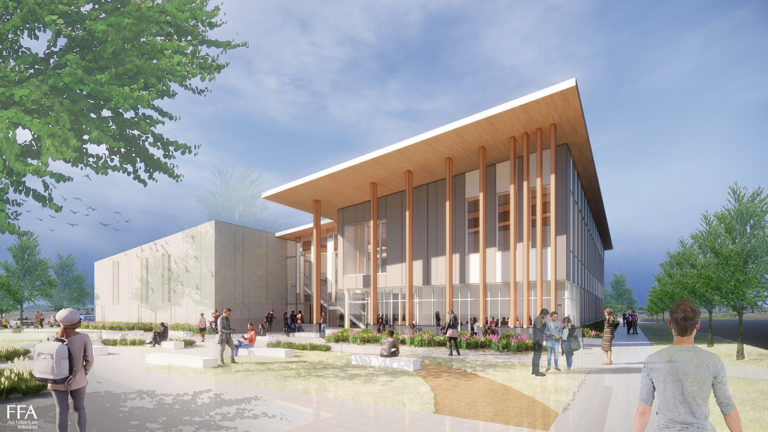 On May 17, 2022, the Tillamook Bay Community College Board of Education will refer to voters in Tillamook County a $14.4 million proposed bond measure to build a new healthcare education building on property the college owns adjacent to the main campus building on Third Street.

If the proposed measure passes, the new building would provide the college the capacity to add a nursing program; add additional healthcare occupations training programs; and provide space to expand and add new degrees and certificates. It would include simulation labs, classrooms with built-in technology, and a large community event center.

Why is Tillamook Bay Community College proposing a bond measure?

TBCC has provided education and job training to students in Tillamook for over 40 years.

In 2019, TBCC commissioned a study on the educational interests of Tillamook County.  It included focus groups, community town halls, one-on-one interviews and a community wide survey. Over 400 community members participated. The study results showed interest in TBCC training for healthcare occupations such as nurses, CNAs, EMTs, paramedics, and technicians. The survey also identified an interest in a large-scale community event space for conferences, trainings, and locally hosted events.

In response, in 2020, TBCC began working with an architect to develop a Facilities Master Plan that outlines the capacity the college would need to deliver general education and career-technical programs to meet Tillamook County’s current and future workforce projections.

In 2021 the Facilities Master Plan was adopted by the board and includes proposed construction of a new facility focused on healthcare education training.

The proposed new building would include simulation labs, classrooms with built-in technology, office space, and a large community event center that the college, local businesses, and community organizations could utilize.

TBCC is the only community college in Oregon that does not have a nursing program. The proposed new building would add the capacity for TBCC to train nursing students locally.

Could the college expand and remodel its current space?

The TBCC Main Campus building has served the college for the past 12 years but cannot accommodate additional growth. The new building proposal would add six additional classrooms and three specialized labs.

Where would the proposed new building be located?

If the proposed bond measure passes, the college would build the new building on land adjacent to the main campus building on the south side of the driveway, which the college already owns.

What would the proposed bond measure cost?

The last time TBCC referred a proposed bond measure to voters was 2007 to build the main college building on Third Street, and upgrade and construct college facilities at the high schools in north, central, and south Tillamook County. That bond measure passed with an estimated bond tax rate of $0.19 per $1,000 of assessed value. Actual tax rates have been less. The current bond debt will be paid off in 2027.